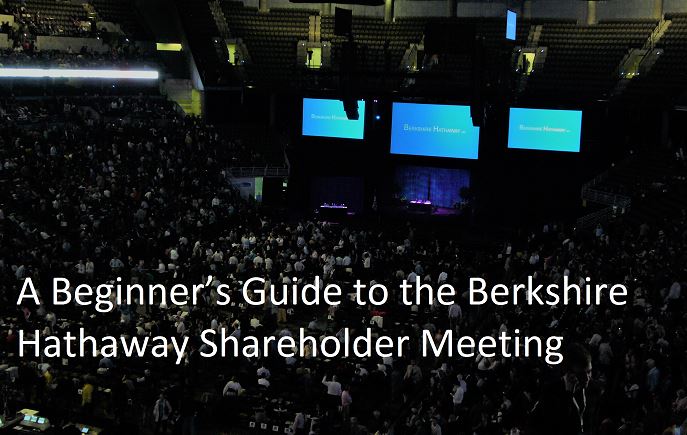 A Beginner’s Guide to the Berkshire Hathaway Shareholder Meeting

Every year people from all over the country and the world, travel to Omaha to attend the annual Berkshire Hathaway shareholder’s meeting.   In this post I’m going to share some of what I learned.  Here are my best tips if you’re thinking of going.

Make Your Plans Far in Advance

The shareholder meeting always takes place the weekend before Mother’s Day weekend.  In order to get the free tickets, called credentials, you must be a shareholder on record as of the first week in March. For 2017, you had to be a shareholder on record as of 03/08/2017.  I personally own a small number of “B” shares just for this purpose.  When you receive a link to an electronic proxy statement, there will be a link to a PDF that you print out and mail to Berkshire Hathaway to receive your meeting credentials.

If you’re not a shareholder, you can still get the tickets on eBay.  Don’t bother with the overpriced ticket scalpers.  The tickets are free on ebay from Berkshire Hathaway itself for $5 with “buy-it-now” to cover the shipping.  The tickets show up on ebay in mid-March.   If you don’t want to miss them, just setup an alert on ebay to let you know when the official tickets show up for sale.  There will be plenty of them available.

All of the nearby hotels in Omaha sell out months ahead of time, and expect to be paying full fare for those that don’t.  Consider staying in Airbnb or in Council Bluffs Iowa.  The same thing goes for the plane tickets.  The fares to Omaha get crazy expensive around the time of the shareholder meeting.

Your goal should be to get in line early to that you can get a decent seat in the auditorium, preferably by 6am.   Even at 5am, the line will be very long.  All of the doors open at the same time, so you might want to check out the lines at the back of the building they might be shorter.  After they open, it’s a mad dash to grab seats on the floor.

Once you walk inside the auditorium on Saturday morning, you will be greeted by dozens of tables with free coffee and donuts.

Make Sure to Watch the Movie

Each year there is a unique Berkshire Hathaway movie that is only shown one time at the shareholder meeting and you have to be there in person to see it.  It’s shown at 8am so get over to a TV monitor in the exhibit hall or to the main auditorium.  It’s usually very funny so you don’t want to miss it.

Spend Some Time Checking Out the Exhibit Hall

This is where you can check out displays of merchandise from all of the Berkshire Hathaway family of companies.  If you like trains, check out the BNSF display.  The Geico Gecko will also be there for a selfie.  You can also pick up some See’s Candies.  The discounts aren’t huge however, and there isn’t much free stuff to pick up anymore.

Go to the Airport to Tour the NetJets Planes

Netjets is owned by Berkshire Hathaway.  When else are you going to have the chance to check out the inside of a private jet?

If you have time, it’s worth checking out the newspaper toss, Nebraska furniture mart, and Borsheims reception.  The Borsheims event is going to be extremely crowded with other shareholders so don’t expect to actually eat much of the free food.

The festivities really wind down in the afternoon session.  Only the hard core Warren and Charlie fanatics will be left.  This is your chance if you want to snag a chair up front and get a chance at a Bill Gates sighting.  If you decide you want to spend the afternoon, it’s worth getting the lunch ticket in advance.  The sandwich is pretty good and you won’t have to wait in a long line.

Although there are occasional Buffet sightings in the exhibit hall and around town some years, don’t count on it.

If you really want to ask a question, find the lineup downstairs in the exhibit hall.  The lines to ask a question are a lot shorter than in the main auditorium.  Not many people know about this, so you have a much better chance.

While massive crowds flock here to celebrate their wealth, they also come here to learn and it’s certainly worth the trip if you have the chance to go.  It’s definitely something that I recommend doing a few times in a lifetime and I plan to bring my own kids along when they are a little older.

Ready to become another success story?